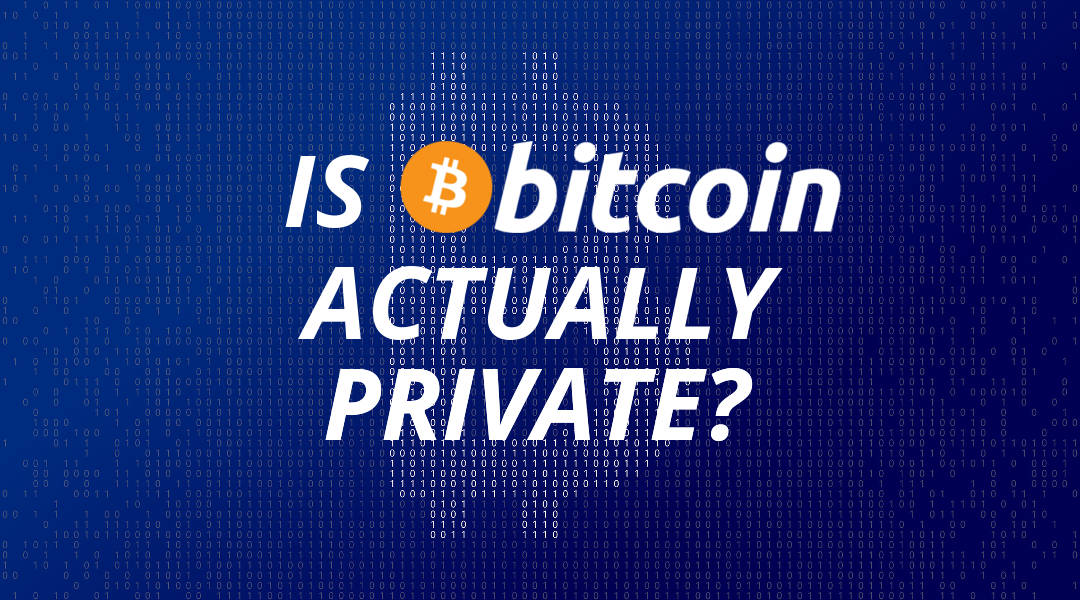 With that said, someone can’t figure out who you are by watching the blockchain alone. All that they would see are Bitcoin addresses, which look like scrambled random data. If, however, someone is able to link a Bitcoin address to your real identity, then they can begin to trace your transactions throughout the blockchain, and that’s where privacy gets dicey.

Unfortunately, there are many ways that your real identity could be tied to your Bitcoin address. Where the risk for this is highest is where you got your Bitcoin in the first place: the exchange. Due to various anti-money-laundering legislation, Bitcoin exchanges are required to know who they are selling Bitcoin to (known as KYC, Know Your Customer). This is why when you sign up for an exchange you almost always need to send in scans of your government ID and a utility bill in order to get ‘verified’. Of course, the depth of information necessary to get ‘verified’ means that it would be very, very hard to ever dispute that it wasn’t actually you using the exchange. In other words, there isn’t much room for plausible deniability.

Another area where Bitcoin addresses can be anchored into identities is in the marketplace. For instance, if you were to use your real name and address when purchasing something using Bitcoin through an online retailer, your identity could be linked to the address you sent the Bitcoin from.

Of course, an exchange or retailer possessing this information doesn’t necessarily harm your privacy unless it gets used or delivered to a third party. This could happen in several different ways: (a) if law enforcement were to ask the exchange/retailer what Bitcoin addresses are associated with you, (b) if future legislation requires exchanges to report users’ Bitcoin addresses, or (c) if your account on the exchange’s/retailer’s website were to get hacked, the privacy of your Bitcoin use may quickly deteriorate.

In addition to concerns around the transaction privacy of Bitcoin on a personal level, there’s a larger scale risk as well of a currency lacking privacy, and that is fungibility. Andreas Antonopoulos explains it best, but fungibility is incredibly important for any currency to operate.

For instance, if you have two five dollar bills, one of which had been used for cocaine trafficking a few years ago, it’s important that despite that history the two bills are both still worth the exact same value. Fungibility here means that the bill used for cocaine trafficking isn’t worth any less than the ‘clean’ bill. If it was worth less, then the currency wouldn’t be fungible, resulting in a monetary system that would be essentially unusable (just imagine checking to make sure every bill you ever receive was actually worth the value on its label).

Fungibility is a concern for Bitcoin because of the fact that, unlike cash, it is incredibly easy to trace its history through the blockchain. Imagine receiving several Bitcoin that had been used in an online drug marketplace, and then trying to deposit that Bitcoin into an exchange only to have it rejected due to its past use. If, on the other hand, Bitcoin was completely private, then tracking that history wouldn’t be possible, resulting in a currency that is more fungible. Luckily, Bitcoin is mostly fungible today, but that’s only because exchanges and payment processors aren’t auditing the transaction history of various Bitcoins. This could change in the future, making privacy an important aspect for any cryptocurrency’s adoption and survival.

Fortunately, there are a few cryptocurrencies other than Bitcoin that offer much better privacy today. The first is Monero, a community project that uses cryptography (ring signatures) to hide transaction data, and in the future will use I2P to hide data even further.

ZCash is a similar cryptocurrency that, instead of being a largely community-based project, is developed by a small team of cryptography experts. ZCash uses zero-knowledge proofs to hide transaction data, a new technology that hasn’t yet stood the test of time, but looks extremely promising and offers enhanced privacy over Monero’s implementation.

Finally, there’s Dash, which uses a modified version of what’s known as CoinJoin. Essentially, to ensure privacy Dash splits transactions into multiple sets of standardized denominations (1 dash, 10 dash, 100 dash, etc), and then packages together multiple transactions to obfuscate exactly where money is flowing. Do note that these privacy enhancements aren’t on by default in Dash, but rather require the user to use Dash’s ‘PrivateSend’ feature to enable them.

Using one of these privacy-centric cryptocurrencies rather than Bitcoin will significantly bolster your transaction privacy. Moreover, if you already have Bitcoin, you can easily trade your Bitcoin for Monero, ZCash, or Dash using the Shapeshift exchange, which doesn’t require any customer information, or account for that matter.