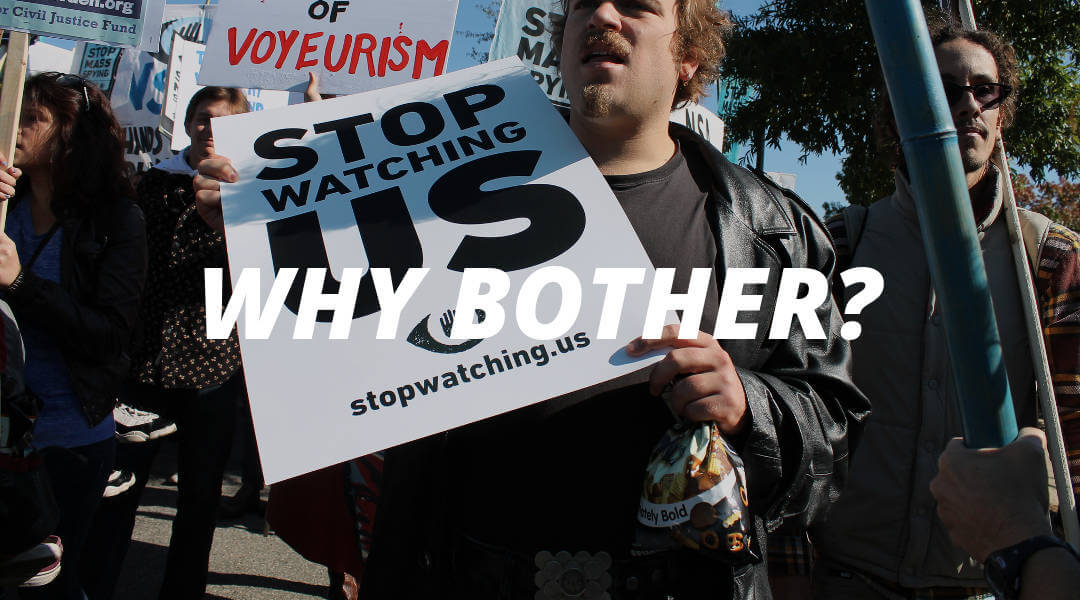 The invention of the internet has given people more opportunity than ever before. We can take part in democratic discussions, learn from vast libraries of knowledge, interact with friends and family, and even buy and sell pottery without even getting out of bed in the morning. This quantum leap in communication technology has led to the expansion of our everyday lives into a new frontier: digital. Through fiber optic cables running under our cities, continents, and oceans, the capability of human interaction has grown from a discreet and localized event, into something of seemingly unlimited reach and quantity. This, however, has not been a one sided change.

Much of human interaction is no longer private. Emails travel through servers owned by corporations who then send them to other servers owned by other corporations before being piped to an inbox secured by a 5 letter password. As we window-shop on online mega-stores like Amazon or EBay, digital salesmen with over-zealous eyes watch out every turn, taking note of the departments we view, the items we buy, and the places we send those items to. Our lives are no longer our own, instead they are digitized, stored, and monetized among multiple parties. The sale of our data has created billion dollar companies and revolutionized industries. We have become walking commodities whose information is as valuable as the products that we want to buy.

However, the watchful eyes of advertisers are not alone. Government agencies across the world do the same at a far grander level. With intelligence agencies in countries such as the US, Britain, and Canada tracking the hubs of the internet at an infrastructure level, our data has never been so insecure. This, accompanied by the subsequent effort to either crack or put backdoors into encryption protocols, has led to the near destruction of the fundamental human right to privacy under the guise of fighting terrorism. We have traded our ‘right’ to operate non-harmfully and freely in our environments for the illusion of increased security. In fact, throughout the entirety of the NSA surveillance regime, there has not been a single case in which the bulk surveillance of the internet has stopped a terrorist attack. In addition, do not forget that if a government agency is investigating someone with good reason they should not have a problem obtaining a lawful warrant to access their data. The bulk collection of civilian data is not an act to defend against terrorism, it is an act to surveil and control the people.

The shear scale of today’s bulk collection of data necessitates automation, where surveillance systems are computerized and programmed to algorithmically flag us for investigation: sans context, sans judgment. We should not accept surveillance if someone who volunteers at a homeless shelter on Friday nights in an area known for prostitution is flagged by an automated computer system and then investigated. Similar investigations can occur if a curious young mind looks up what the West has deemed ‘radical ideologies’ such as Marxism or Libertarian Socialism. A founding principle of western democracy is the concept that a person is innocent until proven guilty. The bulk collection of data to prevent crime assumes guilt and looks for reasons to substantiate that assumption. Under heavy surveillance, we are guilty until proven innocent.

Perhaps, however, you have nothing to hide, and thus nothing to fear. Most of us live within the law, and the collection of our data would be far from incriminating. Aside from asking you your finances, pornographic preferences, and your history of racist jokes, as many privacy advocates would (though, these types of questions are fair if you claim you have nothing to hide), I will instead ask you this: do you believe that others rightfully have something to hide? Do political activists have the right to communicate privately when operating legally without being blackmailed with reputation-destroying information? Do homosexuals in oppressive regimes have the right to express themselves as who they are, free of persecution? Remember also that there are over one million Americans with access to classified information, creating what the NSA itself calls “Love-Int”: when intelligence analysts abuse their right to classified information by spying in on love interests. Not all of us may think we have something to hide, but we must realize that some rightfully do, and it is important that we protect this right.